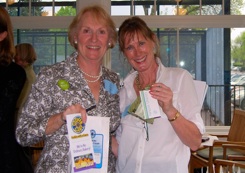 Suicide and suicide prevention was the topic for the November 5 GIVING...

Over the last 16 years, GIVING WoMN grants have been made to over 75 organizations who have a collective impact on thousands of individuals in need in the Twin Cities. Our organization was founded as Women of Courage in February of 2005. A small group of women started discussions in early 2004, envisioning the potential power of in philanthropy and pooled giving, and how it could make a difference in the greater metropolitan area of Minneapolis/Saint Paul, Minnesota. That small group of women has grown to over 125 members. In April of 2009, membership voted to change the organization’s name to GIVING WoMN. Collectively, to date, we have donated over $1.6 million dollars and have touched the lives of countless people in our community served by Twin Cities non-profits providing vital social services.

A GIVING WoMN subcommittee investigated other fiscal agent options and also whether we should establish our own independent 501(c)(3) entity. After investigation and presentation to membership. We determined and our membership ratified that the most economical and best all around solution is for us to operate under the Minnesota Community Foundation which is now Saint Paul & Minnesota Foundation as a Charitable Community Fund. Starting March 2014, we operate under the 501(c)(3) entity of the Minnesota Community Foundation and 100% of our grants will go to organizations nominated by GIVING WoMN members.

In 2009 GIVING WoMN became part of the founding leadership team of the Women’s Collective GIVING Grantmakers Network which is now Philanos, an organization that supports the creation, development and expansion of women’s collective giving nationwide. Their educational webinars, online chats and national conferences provide forum to learn best practices about membership, grant-making and governance to strengthen our organization and inspire smart, informed philanthropy.

GIVING WoMN’s membership is committed to understanding the complex and current issues facing our community. In 2009. The first annual “Eye Opener” education event took place to deliver relevant education about the most critical and emerging issues nonprofits face. Since then, topics have ranged from early childhood learning and homelessness to senior aging and sex trafficking. Speakers in policy making, research, funding and service speak and bring depth and dimension to the topics.

Check out our Podcast!